Have you tried the Toffee Crisp Bitesize pieces you can now get in those things they call ‘share’ bags? If you haven’t you’re really missing out. They’re a regular snack in my house and because they’re miniature they have the habit to make you feel less guilty about eating all of them. Though my Mum will state that not much can live up to the real deal, I decided to bring another delicious alternative to the table, Toffee Crisp Brownies.

My original recipe idea for this was going to involve a lot of layers and potentially a bit more effort, so the great thing about this one is that there is no faff and like the holy chocolate bar itself, all the crucial ingredients (crispy cereal, caramel and chocolate) are mushed together to create a mouthful of pure gorgeousness. Though there is some layering involved (Bezza aka Mary Berry would be proud) it simple consists of pouring half your brownie mixture for the bottom, then sprinkling some Rice Krispies (or some other rice cereal) and caramel on top before a final topping of the leftover brownie mixture. The timing and size of the tin means you are left with a dense, fudgy and rich brownie with a little crunch thanks to both the added caramel on top and the cereal pieces within.

TIP: I use a 23cm sized tray and cook for 20-25 minutes. If you’re using a 20cm square tin the brownies will be slightly thicker so will need to cook for longer – this usually takes around 30-40 minutes. Once baked, the brownies will keep for up to three days in an airtight container – though they’re best demolished a few hours after baking.

Ingredients (makes 12 when baked in a 23cm square tin): 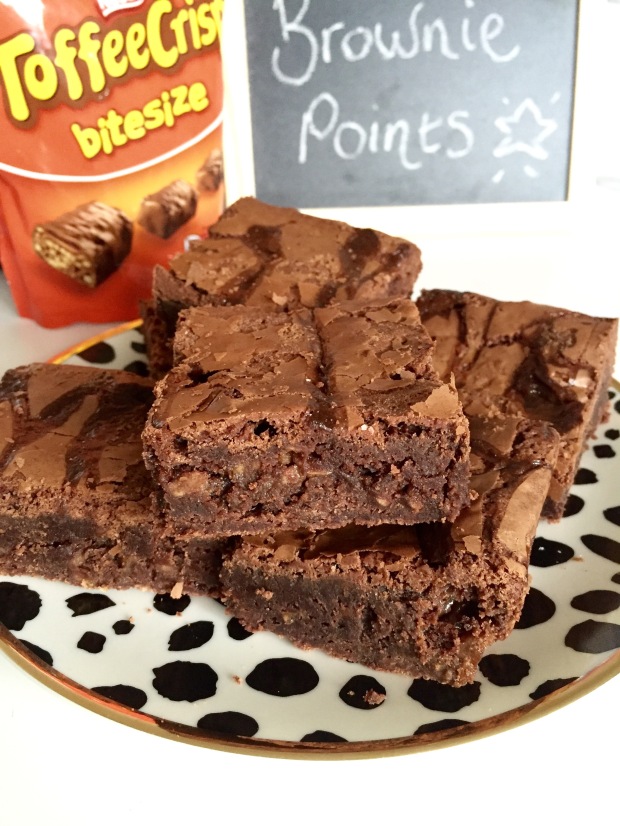 Hello you little cinnamon buns! I'm Nicola, author of Absolutely Muffin, a blog purely dedicated to cake and the sweeter things in life. Have a look around!